Your potential Potential - merely focusing on it can boost it

We’ve been measuring Achieving Your Potential (AYP) through our Performance-Happiness survey, the iPPQ, for over a decade now. And we’re intrigued to find out why the AYP score is consistently the lowest score of your iPPQ questions and what you can do to unlock more potential.

To put this into context, here are some average scores for a random selection of iPPQ items, where 1 is low and 10 is high.

Potential is much lower than other measures, so we set out to gather further granular data on your sense of Achieving Your Potential. And our research findings surface some interesting insights: 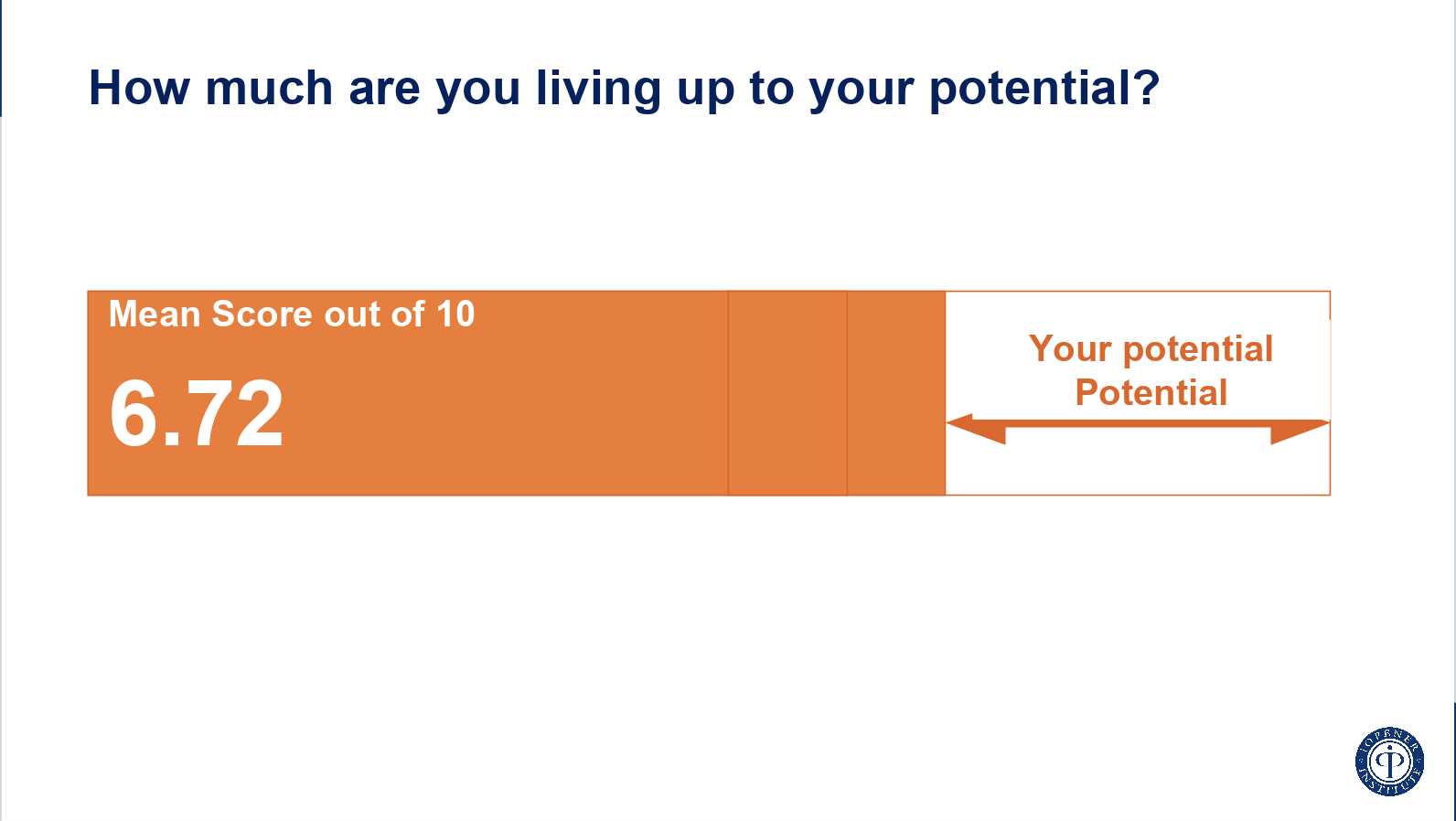 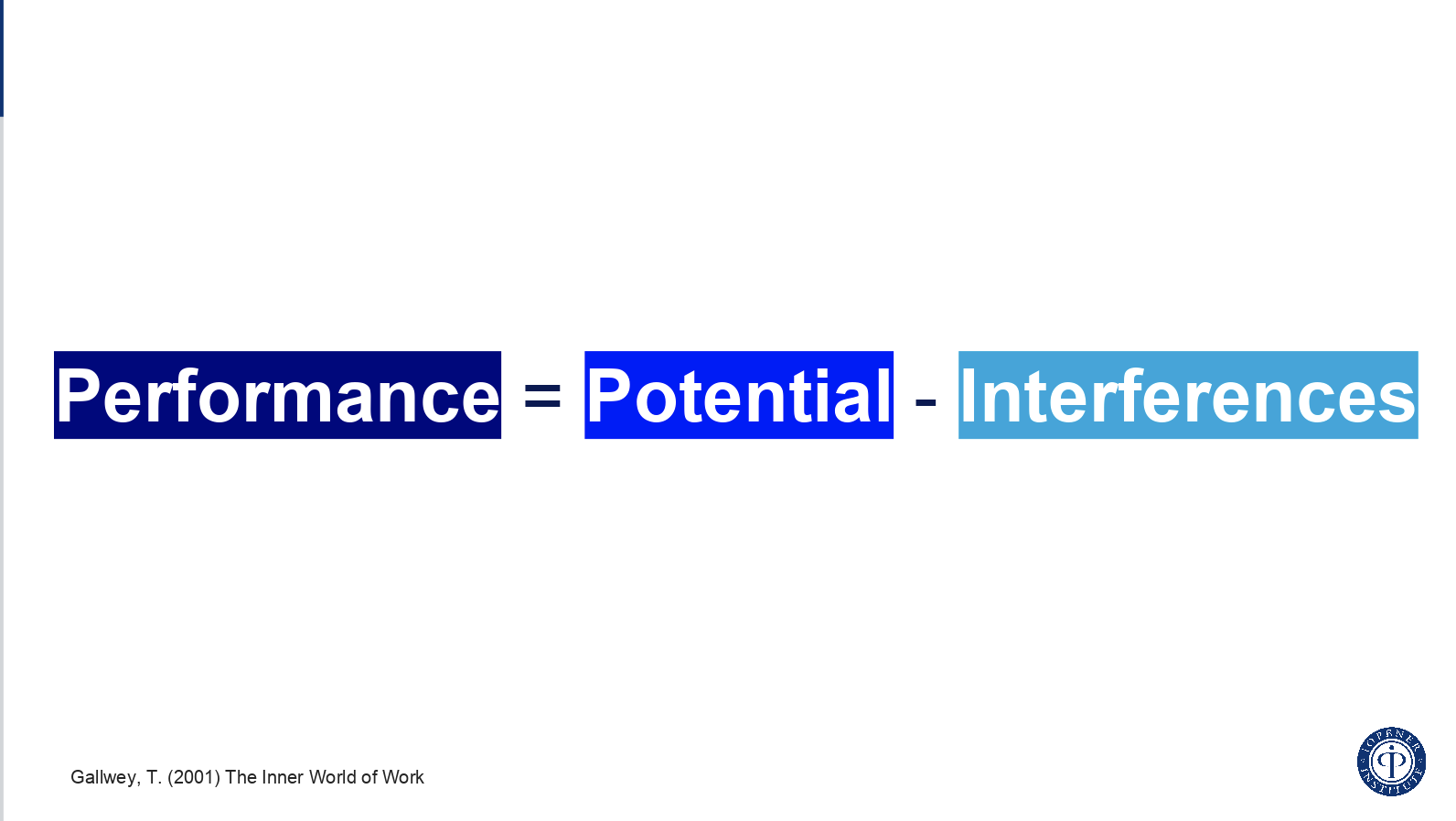 Looking at this equation, you can see that, if your average performance is 67%, then unlocking your potential Potential is synonymous with eliminating your interferences.

Your interferences can be external or internal.

Knowing what your interferences are is your starting point

Notice whether your interferences that you list are ‘towards’ or ‘away from’ items. For example, you may say:

Or you may say:

In Neuro-Linguistic Programming terms, these categories tell you something about how your brain operates. If you have a leaning towards one or the other, then you may be able to generate more ideas if you now list things in the other camp as well.

Why is your AYP score so low?

So, back to the quandary of why the AYP score is always the lowest in the iPPQ. The answer could lie in an appreciation of the delicate balance between confidence and competence. 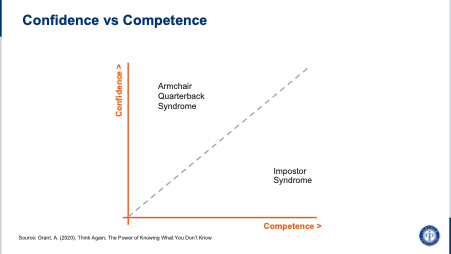 When the two follow a linear path of growth and development, you will feel ‘on-track’. But, naturally, people deviate from the path. Sometimes people’s confidence may be inflated and they are blind to their own incompetence. Adam Grant calls this the ‘Armchair Quarterback Syndrome’, using the analogy of people shouting at the TV screen when watching a match at home, believing they know more than the coach in spite of the coach’s impressive experience and track record. You may be familiar with the Dunning-Kruger effect[1] and you’d be right to link the Armchair Quarterback Syndrome with this effect.

Other people have the opposite issue. Their confidence is dented, causing them to be blind to their own competence. This is ‘Impostor Syndrome’[2]. They feel like a fake and operate with a nagging concern that they are about to be found out for not being competent enough or experienced enough to meet the responsibilities and expectations of their role.

Interestingly, if you operate within the Armchair Quarterback Syndrome zone you’ll gauge your ‘potential Potential’ to be high. You believe that your current reality just doesn’t reflect what you’re capable of. Perhaps you’re waiting for someone to talent-spot you.

But if, on the other hand, you operate within the Impostor Syndrome zone, you’re probably well aware that it’s mostly 'you, yourself and your mindset’ holding you back. So you wonder whether you’re cut out for bigger achievements.

Getting to the AYP sweet spot

However, in between the two, there is a sweet spot that Grant calls the ‘Confident Humility Zone’. This is a band that lies just beneath the linear path of expectation. So, let’s say that an 8 out of 10 shows confident humility in your ability to achieve more potential. This is what is sometimes referred to as the ‘optimal eight’ or ‘magic eight’, leaving room for further growth.

So, if you are a 6.72 and in the Impostor Syndrome zone, perhaps an initial goal would be to work out how to shift towards the Confident Humility zone and get to, for example, an 8. You can leverage your questioning skills and your willingness to learn more. If, on the other hand, you’re in the Armchair Quarterback Syndrome zone, then you can seek feedback.

Understanding other people’s views of your competence and learning greater humility is your homework. 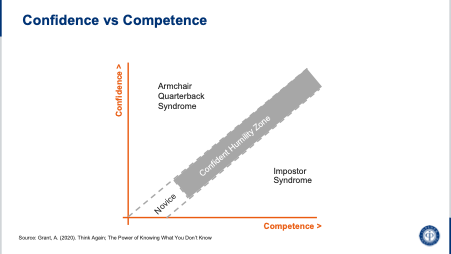 Get clear about what you want

Start by getting clarity on what you want. Not just at work, but in life in general. Clarity separates the satisfied from the non-satisfied. And, remember that between your ears you have a tool that is most likely only operating at a fraction of its capability.

He spends these chunks of time dedicated to thinking. He goes off on his own to his remote log cabin with a pile of books, a pen, reams of paper, and … his brain. Uninterrupted.

In these weeks, he ponders challenges, problems, issues. He reads, researches and reflects. He indulges in hours of ideation. He plays around with creative ideas. He strategizes about the way forward. He formulates plans.

You may not be Bill Gates, but you’re just as able to carve out thinking time. In fact, it may just turn out to be your most productive time yet. Your first task for thinking time is to figure out what you want to dedicate your time, energy and focus to. Your follow-up tasks are how to set goals towards that end and then how to achieve your goals.

If this is as clear as mud (i.e. difficult), then you need a coach, a thinking partner or a wise friend. If this is obvious and you know how to do this but haven’t done it yet, then you need the same as Gates has; inspiration, pen and paper and brain-in-action.

Like our AYP survey, just focusing on your potential boosts it.

Our five minute survey on Achieving Your Potential has highlighted how just focusing on your potential can be uplifting and can help you give you that gently nudge to get on with it.

My words of wisdom:

Life is about assessing choices, choosing (decision-making) and then taking action.

iOpener delivers workshops on Achieving Your Potential. These are highly reflective and exploratory focus days, in which participants work with professional coaches as well as peer coaches and thinking partners. If you’d like more information, you can contact us.

[2] The term impostor phenomenon was introduced in 1978 in the article "The Impostor Phenomenon in High Achieving Women: Dynamics and Therapeutic Intervention" by Dr. Pauline R. Clance and Dr. Suzanne A. Imes